A 31⁄2-foot-long sword made of red oak can transform your body, but it can’t get through airport security. That’s the lesson Annika Kahn has learned flying back and forth from her home in San Francisco to Washington, where people are eager to take a stab at her fitness program, called Jungshin.

Local chain Sport & Health has embraced Kahn’s concept and plans to roll it out at all 24 of its locations in D.C., Maryland and Virginia.

“It’s a total-body workout with a unique tool,” instructor Michelle Blake says. “As soon as you grab on to the sword, you feel a subtle contraction in your core.” Because you have to concentrate on slicing the air so you don’t slice the person next to you, Blake says, “It won’t let you think about anything else.”

In other words, Jungshin lives up to its name, which means “focused mind” in Korean.

When Kahn, who has studied the Korean martial art of Kuk Sool Won for 20 years, had a son in 2001, she followed her instructor’s suggestion and gave him the middle name Jungshin.

To help repair the damage to her body from a challenging delivery, Kahn picked up a wooden sword and made up cutting motions she could perform as therapy. “It healed my back, strengthened my lumbar and aligned my joints,” says Kahn, who came to realize she’d also given birth to a new way to work out. 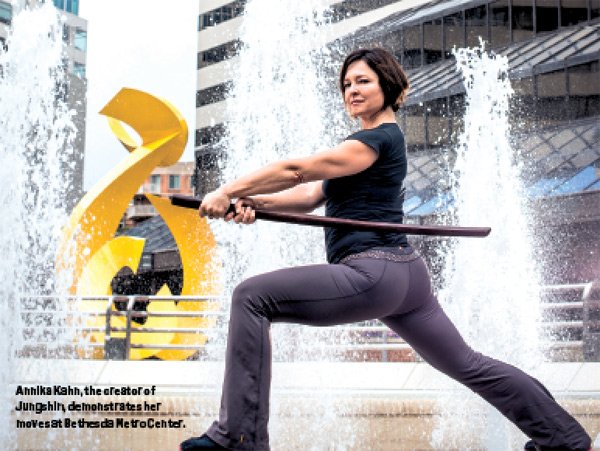 From Kuk Sool Won, she borrowed the emphasis on breathing, the basic sword strikes and fingertip pushups (which are as difficult as they sound). She added in plyometrics, active flexibility and other elements from the gym world. And she ended up with her Jungshin system, which has taken off in Washington, where she’s led five teacher training sessions in the past two years.

At Blake’s class last week in Arlington, students chose their weapons care- fully. (The blunt swords weigh 1 to 3 pounds and vary in length.) To warm up, they stood in a slight squat and repeatedly pulled the swords over their heads before launching into a series of “flows.” Those feature a lot of lunging to the side and the front while circling the sword, and build up to combinations of steps, stabs and jumps.

Then the lights were turned off, and the students kneeled on their mats. Instead of forcefully slicing their sticks, they closed their eyes and practiced moving them as slowly as possible.

“The sword is intimidating at first,” says 41-year-old Dani Cook, who’s become a Jungshin regular at the Crystal Park Sport & Health. “But once you get used to it, it can be meditative.”

Blake loves watching her students float out the door after class. Though the workout is intense, the result is actually calming. “You’d think it’d be violent,” she says. “But the tension in your neck is released. You’ve taken your shoulders through the range of motion.”

And you’re ready to attack anything that comes your way — even if you’re not armed with a wooden sword.

Class Notes
Sport & Health’s Jungshin classes — currently at the Crystal Park, Gateway and Old Town locations, and soon to launch at Waldorf, Bethesda, Stafford and Frederick — are based on two of Kahn’s formats: Athletic Flow (a test of cardio and endurance) and Core Cut (killer conditioning). But there’s more to sample:

Start off small at a six-week-long short- sword class debuting at Crystal Park (2231 Crystal Drive, Arlington) on Sept. 10. You hold a pair of 21-inch weapons, one in each hand. The short swords allow you to go faster and do more kickboxing-type movements. Contact Mblake@ sportandhealth.com.

Focus on sparring at Jungshin Combat, a partner fighting series being launched at the new gym Fighting Trim (Ronald Reagan Building, 1300 Pennsylvania Ave. NW; 202-656-7075, Fightingtrim.com). Sign up to reserve a spot at one of the free demos scheduled for 5:30 p.m. every Tuesday and Thursday in September.
Quote:

“As soon as you grab on to the sword, you feel a subtle contraction in your core.”